I'm exploring the line between hardware and software by creating a series of demos within a minimal, free and open source environment. These demos span from blinking an LED to implementing a toy operating system. The goal is to minimize parts of the system that we take for granted and gain a better understanding of computers and operating systems.

In the non-embedded world, when you compile and link a C program into an executable you are doing so with the intention of running it within a specific operating system. When you compile baremetal or -freestanding you are telling the compiler that you intend to run this without relying on an operating system. This could be used, for example, to write an operating system. Alternatively it can be used to access the hardware of a system directly on an embedded system. Doing so sacrifices higher level luxuries such as memory management, standard IO, thread/process control, etc. Because of this, sometimes it makes sense to run on a type of minimal OS optimized for embedded, e.g. a real time operating system or RTOS.

When you use a commercial development platform, you will likely be provided with a cross compiling toolchain and possibly an RTOS. For an example see freedom-e-sdk. Alternatively, there are also attempts to make small, but hardware agonistic RTOS see zephyr.

RISC-V is an open alternative to ARM or x86.

RISC-V (pronounced "risk-five") is an open standard instruction set architecture (ISA) based on established reduced instruction set computer (RISC) principles. Unlike most other ISA designs, the RISC-V ISA is provided under open source licenses that do not require fees to use.

Renode is a simulator designed for embedded firmware. What sets it apart is the goal of not only emulating CPUs and SOCs, but also entire boards with peripherals such as ethernet and even multi-node networks of devices.

Alternatives such as QEMU aren't as optimized for the embedded space.

An emulator that you might use for playing video game ROMs is specialized for a single platform. For example, in an emulator cpu, graphics chips, audio, memory-map, etc are fixed and optimized. Renode on the other hand configures each platform with a config file.

To get started you will need to clone the repository. This includes all of the examples as well as the source for Renode simulator and GCC RISC-V toolchain.

Renode and GCC are linked via git submodule so if you use --recursive you can clone everything in one shot.

Technically you could try to find these pre-compiled from your distro or elsewhere, but I suggest compiling from source to ensure we have matching versions and build options.

There are some compilation prerequisites and gotchas. If my hints don't help, just refer to the official project documentation for each.

To ease the burden on my own memory, I have added a Makefile to capture the various build options for the toolchains. If you have all of the build requirements already installed, building both can be as simple as:

Running make toolchains should usually be enough to let you know what you are missing. I have included some hints below, check the comments as well as different distros may have different packages.

Below are my hints for which packages to install, this can be different depending on the distribution. I've also included links to the official guides for getting unstuck.

Mono provides the runtime and C# compiler required for Renode. Installing it can be tricky on some distros and having a mono that is incomplete or outdated can lead to hard to understand errors. Make sure your whole system is up-to-date if you run into issues compiling Renode.

Arch
Everything worked fine using the mono package from extra.
Ubuntu
Do not use the mono from standard repos. Follow the instructions for mono-complete here https://www.mono-project.com/download/stable/.

Beyond here, we assume both renode and riscv-gcc are on your PATH. To accomplish this, you can source this activation script.

To verify and get familiar with the tools we'll start off with the "Hello, World" of hardware projects: blinking an LED.

Just get it running

First open up the project folder:

Then following command will handle all steps 1-3, we'll break this down later:

If everything went correctly, you should see something like this: 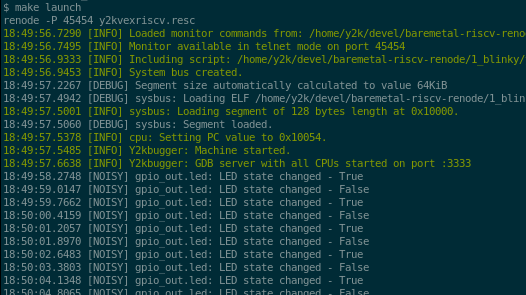 You should have also noticed the monitor window open up. This is used to control the running renode machine; the ? command will list the rest. The tab completion is also very helpful.

Alternatively you can kill renode using CTRL + C in the terminal that you launched it from.

I like this because we can make a very minimal hardware configuration, free from any vendor specific complexity. Besides the cpu and memory, we have a general purpose input output (GPIO) register mapped to memory location 0x60000800. The -> makes a connection from the GPIO pins to the LEDs. I don't exactly know why we need both 0 -> led0@0 and @ gpio_out 0 as it seems redundant; if anyone knows, please let me know. You'll also commonly see -> used for connecting interrupts.

To toggle the LED we will need to write a driver that knows how to control the GPIO by writing to it's register.

This initial program is written exclusively in RISC-V assembly [4] this is simple enough that every instruction that gets executed can be traced to this source file.

The code to drive this GPIO device is dead simple, you just need to write data to the memory location that maps to the GPIO pins.

Note that the platform specifies the mapping of 0x60000800 to the GPIO register.

GCC will build an ELF binary based on our assembly source code. This binary is the ROM image and Renode is the emulator.

By default, gcc outputs a format called ELF. This format is understood and loaded by the OS, i.e. linux,. Renode also has the ability to understand ELF files and will load the sections into memory and put the program counter at the right spot to start executing [1].

riscv32-unknown-elf-gcc
gnu compiler. This compiles, assembles, and links input source code. This is the special cross compiling variant that we built earlier which runs on your host architecture (e.g. x86), but outputs binaries for riscv32.
baremetal.s
Assemble source file.

Pause and step though code that is running on the simulator.

After launching, you may attach GDB using make debug. This connects to the GDB server already running within Renode. It uses a GDB script to store default configuration, such as breaking execution and starting the text user interface or TUI, which shows source code alongside the disassembly.

If you are familiar with GDB you know the power of setting breakpoint, inspecting stacks, and much much more. 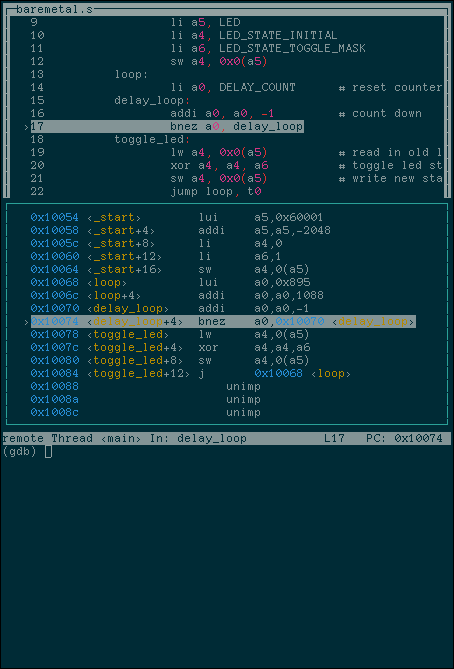 There are a couple simple commands that I find to be useful when exploring baremetal programming.

To repeat the last command, just repeatedly hit Enter. This makes it easy to single step through the program.

You will notice that you get stuck in the delay loop, you would have to hit Enter 9,000,000 times to make it though that delay. This is not a good way to add delays since it uses 100% of the CPU. If we were building an operating system, we could utilize a hardware timer and allow programs to request sleeps through an API. During the sleep the OS could go about running other processes, and then wake up the sleeping process at the appropriate time.

You can set a breakpoint at a line or symbol. Tab completion should work here to display available symbols. So B Space T Tab Enter

You can dump all registers,

or you can print a specific one:

You can mutate a register value and continue on:

Changing the bitmask for blinky

Let's do something fun and prove we can modify a program's state after breaking.

If we just run the blinky example, note that we are blinking led0:

Now we are blinking led1 instead of led0:

I am inspired by Miro Samek. He does a great introduction to many embedded programming concepts and I want to share that in a way that we don't need to have a real board.

Check out his course here: https://www.state-machine.com/quickstart/

In Part 2 I review a list alternate dev environment and how I converged on what I've described here. There are many easier and more complete/integrated solutions, but we have a stated goal of gaining understanding and this is a forcing function for more control over details.