What to do with 6 ripe persimmons?

Whenever I visit Jungle Jim's, a Cincinnati international market known as "a theme park of food", I make sure to hunt for a new fruit. After grabbing a few interesting specimens to try, I found a section that I had never noticed before: clearance fruit. Normally overripe fruit wouldn't be too exciting, but persimmons are best when super-ripe. I took home a six pack, but I didn't have a plan for them yet. After a bit of googling, I settled on making an English style holiday pudding. Not being British, this was a dish I was only vaguely aware of. After reading about the dessert a bit on the internet, I had a case of what googling calls the Baader-Meinhof Phenomenon. It was everywhere. The strongest example was when I went to see a Christman Carol again, I can't believe that the "pudding scene" had always been there, never stirring my brain to ask "wtf is this pudding?" before, I think I thought it was meat.

My recipe is based on:

Traditionally one would use an English pudding mold, I didn't have that so I buttered a large stainless steel mixing bowl. I used a stock pot as the boiler setting the mixing bowl on top. Add enough water to the stockpot to come halfway up the mold; to gauge depth, test this with an empty mold by pressing in into the water.

Sift flour, and add all "dry" ingredients to a bowl. Stir until evenly distributed.

Toast pecans in a frying pan and add all "Simmered" ingredients. Simmer for about 10 minutes. Remove from heat; let stand for 15 minutes, allowing time for fruit to soak up excess moisture and become tender.

Meanwhile, slice tops off persimmons. Note: Original recipe says to press the fruit through sieve to remove skin. This is hopeless with a normal strainer and it's not hard to just separate skins by hand. Scoop out flesh, discard skins. (you should have 2 3/4 cups persimmon puree). Whisk in milk

Cream butter and sugar; then add the rest of the "Wet" ingredients to the butter mixture. If you are using an electric mixer be sure to keep the bowl scraped.

Step 5 - Bring it all together

Using minimal mixing, fold in all of the dry ingredients over a few quick additions. While still partially unmixed dump in "simmered" mixture of pecans, raisins, ginger, etc. Fold all until just barely mixed. Pour into prepared mold and cover with lid. 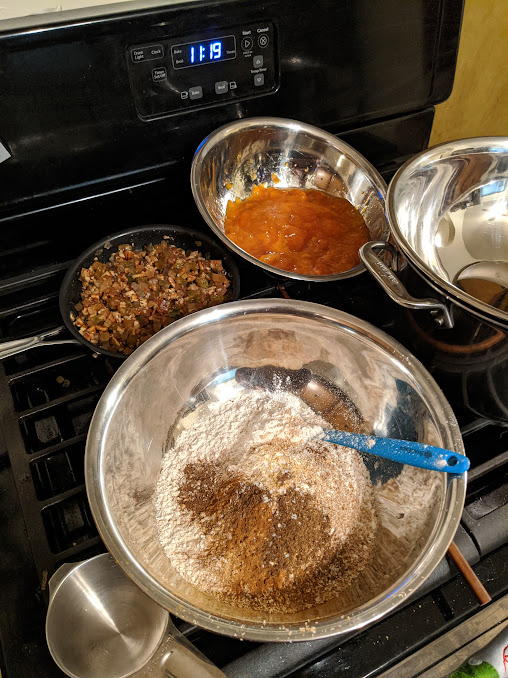 The three mixures and the stockpot "double boiler".

Bring water in stockpot to a boil. I let this go ~8 hours because of the size, 6 probably would have been ok. Since it's being steamed it can really get overcooked unless it starts to dry out. Time really depends on shape of mold+pot and the size of the pudding. Use a toothpick or skewer and test that the center is no longer a batter before calling it done. Pudding after it had finished cooking.

Now we are ready to serve. Whip the heavy cream and brandy topping to soft peaks. 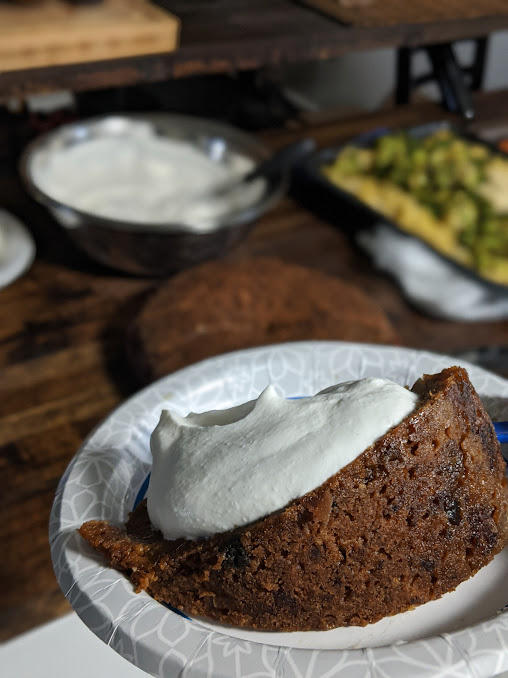 Flip the pudding out onto a plate and cut. Serve with brandy cream sauce.